Selling millions in property every month, Leah Canfield also plays it forward in the community 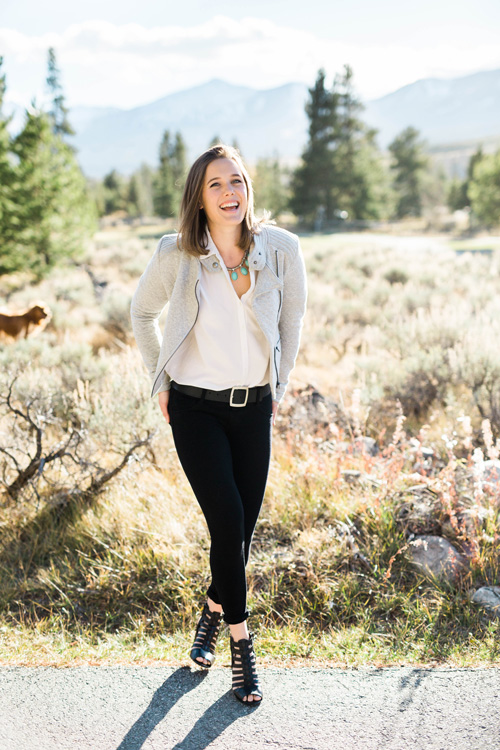 Breckenridge local Leah Canfield has accomplished more than most people in her three decades on earth, including becoming one of the world’s most successful real estate agents.

Having moved to Colorado with her family when she was 8 years old, Canfield followed in her father’s footsteps, becoming an alpine ski racer.

She competed for Breckenridge’s elite Quantum Sports Club (now Team Breckenridge), steadily earning her way up the ranks to traveling and competing with the U.S. Ski Team. Unfortunately, a series of knee injuries sidelined her racing career, but she pivoted and began working her way to the top in other pursuits.

She studied real estate and finance at the University of Colorado at Boulder, during which time she had the foresight to begin investing in real estate, purchasing and renovating a property in Alma and selling it for a profit. In two and a half years, she graduated as valedictorian in 2014, after which she earned her real estate license.

“At first I thought I could sell real estate as a way to fund our investments. Then I enjoyed it a lot more than I thought I would. It was also more difficult than I thought it would be, to be honest. That was good for me. I like a challenge. The harder something is, the more I like to do well at it,” Canfield says.

She set about learning everything she could about every neighborhood and subdivision in Summit County, while also producing the winning proposal for the Blue 52 employee housing project in Breckenridge.

“What I had to do was become a true expert,” she says. “I grew up here, but I didn’t know who the best painter was, or the handy man, or what builders specialize in what kind of homes. I had to get out in the community.”

Canfield’s involvement in the community long predates her real estate career. She has volunteered with Mountain Mentors, spending time with a local child for the last 9 year. She also supports time and funding to the Family and Intercultural Resource Center (FIRC), Summit County Animal Shelter and the Summit Foundation.

“I was raised with privilege. There’s no way to sugarcoat it,” she says. “I was never the kid who didn’t have enough food on the table. This community was always extremely giving to me, toward my sports teams. I got scholastic awards and local funding. It’s only right to give back to the community that’s given me so much.”

Still an avid skier in winter and mountain biker in summer, Canfield has reached the top tiers of her profession, becoming one of the top 30 real estate agents in the country with the National

Association of Realtors’ prestigious 30 Under 30 award as well as earning International Society of Excellence status, which puts her in the top .4 percent of all Coldwell Banker agents worldwide.

“She grew up here, went to high school here and from what I’ve heard, has always been super motivated and kicked butt in everything she’s ever done,” says Coldwell Banker Mountain Properties Summit County managing broker Scott Lerner. “When I got here, even with my experience, you could tell she had a fire lit under her and was going full bore. Yet, she’s so unassuming. What sets her apart is she truly understands the business and the time it takes. She’s a really good communicator. On top of that, she runs a small team of agents and is good at picking out talent and mentoring.”

Quick to share credit for her success, Canfield says that “building a great team is what really makes the difference.”

In 2021, her team closed the year with $115 million dollars in sales. Canfield personally accounted for $50 million of that.

“Getting to work with Leah over the years has been awesome,” says teammate Sinjin McNicholl. “She is always willing to help problem-solve, provide guidance and come up with creative marketing ideas. Her energy, passion for real estate and knowledge pushes us all to grow and become better agents every day.”

In addition to her team, Canfield says a major factor in rocketing to the top of the industry is a knack for reading the room.

“I like that there’s a real human element to it,” Canfield says. “We work with so many types of people. They all have different communication styles, different values and goals. To meet someone and recognize, OK, this is how this person wants to communicate, that human aspect of the job is my favorite part.”